I'll admit it, I'm terribly spoiled. I'm riding in coach for the next eight and a half hours and it may be the death of me. Luckily I had a business class seat on the way over, which really helped with my exhaustion.  A solid four hours of nearly flat sleeping was a delight.

Now I'm back with the masses.  Granted it could die worse.  There's no one next to me and I'm spread out over my two window seats. Still, it's not the business apartment I liked.

Enough of that.  According to the little inflight motion thing, we're cruising at 36,000 feet and just passing off the northern Coast of Spain. For you aviation geeks we're just passing XUSAN intersection on airway UP177.  And heading back across the pond for the good ole U.S. of A.

The last couple days and been pretty packed.  I left Louisville Monday morning after an all night shift and hour nap.  Spent some quality airport appreciation time in ATL while waiting for Charity to arrive. She almost didn't make it.  Par for the course really.  But she managed to make it just in time. 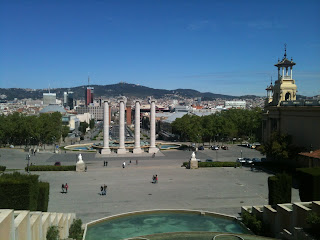 Off to Barcelona.  A destination picked for the amount of open seats available.  And it sounded cool and I've never been there.  Charity has never been to Europe and it seemed like as good as a place as any to start. So we arrived bright and early on a Tuesday. We found our housing for the next couple nights, the Hip Karma Hostal and discovered we couldn't check in for a couple hours.  They locked our bags away and we were off to be tourists.  Luckily the main square of the city, Plaza Catalunya, was only a couple blocks away.  From there a day on the big red bus and saw all the major sights.  Some meandering about the Barrio Gotic (gothic quarter) for lunch and back on the other bus.  It was a good quick way to see the city.  And since we were short for time, it worked pretty well.  It's also the first time ever I've taken a "tourist sightseeing bus". I'm generally opposed being a snobbish traveler.  But it worked pretty well.  That night, finally we checked in, cleaned up, and headed out for dinner.

We walked down Las Ramblas, a main walking street full of shops, restaurants, bars, and people selling really annoying noise makers. We found a place for some tapas and paella while the town was all attentive to the FC Barcelona/Chelsea semi final match.  After dinner, a stop was made for the continuation of the Irish Pub tour of the world. We made it back to the hostel and crashed after a full and exhausting day.

Back on the airplane, dinner has been served and we've moved into Shanwick Oceanic airspace and entering the NAT MNPS area and most likely on a westbound track to the US.

The second day started with coffee (café tricolor). The morning we headed to the Mercate de Santa Catarina. Again through the winding streets of the Barrio Gotic.  In the back of the market is an excavation of some ruins there, dating back to Roman times, about the 4th Century, and moving forward.  After ward, down to La Barcolenetta and to chill by the beach.  Literally, we chilled since the weather was breezy and cool, but we sat out and had lunch on a patio, followed by beachside cocktails.  After some  shopping, we made it back to clean up and head off to a flamenco show.  The Travel Bar offered a pretty good deal for for a show, tapas, and all you can drink sangria.  DId you know sangria is made with brandy and gin?  Neither did I but our bartender used all thsat in the recipe. 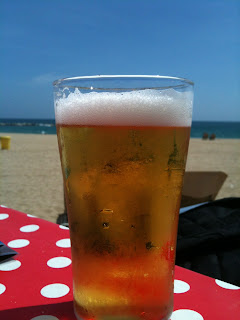 We ended up with a group of people: an Aussie couple on an 8 week/21 city euro trip, a German couple who did a random" let the airline snooze your destination" trip, a Québécois couple on a week trip to Barcelona, and a couple ladies from Norway enjoying a holiday.  the Sangria flowed like water, and we all had a great time, eventually some how be befriended the bartender.  We also learned that the tradition Catalan dish that involves cow stomach in a sauce isn't something any of use enjoys.

I think this night was one of the best parts of traveling, meeting people from all over, making friends, and maybe someday meeting up again.  That by far is the most awesome thing I did in Barcelona.

A quick sleep, and off to the airport, and as you figured out we're on the way back.  A nice, quick, and really not to expensive trip. Glad I came, and very happy Charity invited me.  On arrival in ATL I'm meeting little Lewis, Alida, who finally decided to grace the world with her presence.  Now, for some inflight movies and relax in coach.. :-). 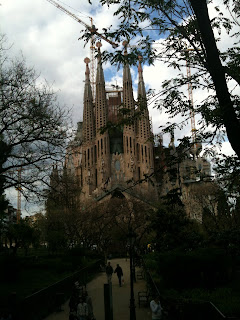 There's this one particular harbor, So far but yet so near

Sometimes you look at the world and just have a feeling you don't fit in.  Having been a nerd or "band geek" most my life I'm some what used to not being part of the "in" crowd.  Luckily I can have the smugness that the old "in" crowd is all saddled with debt and life and will never see the Southern hemisphere.  Truly, living well is the best revenge.

But that's not what's on my mind at the moment.  Let me set the moment, there's a beach.  There's an ocean. There's palm trees.  There's leaves rustling in the sea breeze.  There's an amazing array of stars to be charted.  I did learn that you can see the Southern Cross from the northern hemisphere tonight.  Thanks to an iPhone app, Star Gazer, I've become quite the stellar cartographer.

Anyways, back to the out of time, out of place feeling.  I recently finished yet another book on aviation's early days.  When the world was way bigger than it is today.  When you could trudge off to an island in the Caribbean and be a million miles away from anything.  Unfortunately that's not so true anymore.  But that sort of lifestyle really appeals to me, the days of an imperialistic mindset.  Maybe British (with their sea power of the late 1800s) or American (with their reach in the early 20th century). The ability to be off and away from the reaches of convention, or at least the constraint of constant contact with the world.

That being said I'm lost without my iPhone at my side.  And even here, on a small bay in the Caribbean without internet access, I'm stressed.  How did it become so imperative that I be in touch with everyone.  How did the world operate at the speed of mail sent by a ship?  It seems like something I'd be up for experiencing.

So my current fantasy involves a live shortly before WW2, living ob the edge of America...  Crossing oceans on those newly launched "flying boats". Experiencing the unheard of "Orient" and "old countries". I'm sure I'm romantizing things, but it sounds great.

At any rate, I'm going to continue to watch the Southern Cross float across the horizon while Jimmy Buffett sings of a time before St. Somewhere was condo development. Is there an island left where I can go and live that ideal life?  I suppose I should keep looking until I find it. 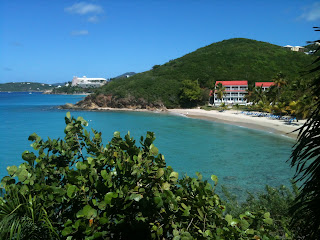 Posted by James Dees at 2:14 PM No comments:

I Gotta Fly to St. Somewhere

Some how this week I became thrifty again.  I had already planned to spend money on a hotel room in ATL due the imminent arrival of the Lewis child.  Turns out, she's stubborn and doesn't want to come out, thus I had a the spare room all to myself.  But after a weekend of fun, I felt needed to not spend a lavish amount don disappearing somewhere.

Turns out I was wrong, I needed to do that.  And luckily, Delta had a non stop flight to St Somewhere.  And even though beach side resorts were pricey, I decided to splurge for two days there.  After a short flight and a long check in (last minute priceline deals don't always make it to the hotel before the guest does), I bellied up to a pool bar and decided it was time to consume beverages.

The destination is Bluebeards Beach Club.  And so far so good.  I'm happy with the room, it's larger than nreally need by about double.  The pool bar is staffed by a couple of UGA fans, but otherwise they seem like decent fellows.  Tonight I decided not to venture out. Instead a chill night with my beer. This is more of a time share type place than hotel, thus lots of older types. But I was in the mood for quiet and chill. At least for end night.

And warm water and sand always helps. I feel Jimmy Buffett or Bob Marley should be a constant musical accompaniment.  So tonight, is quiet and peacefulness.  Tomorrow night though, it's crab legs and booze and the next beach bar down the road. 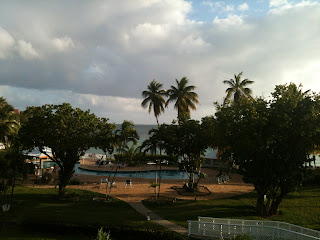 Posted by James Dees at 2:01 PM No comments: