Look around, leaves are brown There's a patch of snow on the ground... 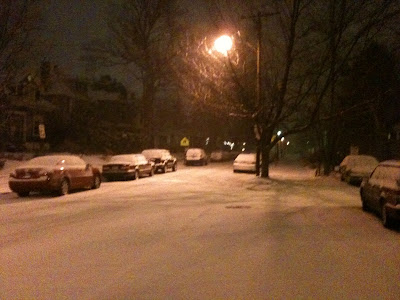 F'n snow! Snow is pretty and fun when it's fresh and falling, but the next day when you have get out and remove a couple inches from the car there is a loss of enthusiasm. Of course it being currently 21 degrees out doesn't help with the mood at all. But alas, at least I made it home in good order yesterday.

One thing that continues to frustrate me as a non-rev passenger... the amount of paying people who take up all the seats! I know, whiny yes... but it's annoying. I have, through a very good friend, access to check the passenger loads on Delta flights. Using this knowledge, I tend to plan when and how I'll get from point A to point B, and usually hope to skip the route through point C, D,E, and F. But it seemingly only takes one giant winter snowstorm to scree up all this planning.

I took a trip south this weekend for my nieces graduation fiesta. While not being generally all that enthused about the family time portion (and luckily one of my biggest critics about attendance at family functions was conspicuously missing... hrrrmm) but it was all well and good. After the "old folks" left, the keg was tapped and the "kids" started up. I include myself in the "kids" portion if only because I refuse to be an old folk. But being a good decade older than most the friends doesn't help. ANd I did go easy on the beer, partially since it was Nattie Light (but free which makes it more palatable), partially because I knew I;d have an early morning (more later), and partialy because I was still slightly feeling Friday nights excesses.

I was happy to be there, to socialize with people who seem to not yet be too jaded by the realities of life, and to celebrate Darci's accomplishment... I can't put into words how proud I am of her, not just for getting through college, but for being the adult she is now. An amazing feat today.

That being said, I plan was was to stay later and get up to fly back to SDF Sunday afternoon. But weather intervened in the form of snow in the Atlanta area. Everyone knows how well southerners fair with snow fall, and not even a full out blizzard but just a centimeter int he grass shuts the city down. So, I made the decisions that I'd need to leave before the snowflakes start falling at the airport.

Well, apparently the day/night before the same winter storm responsible for my early departure shut down the Twin Cities, and with it Delta's hub in MSP. So, the flight I was planning to jump on suddenly went from 20 open seats to none. Something I discovered on arrival at gate C37. Apparently to get from ATL to MSP you can connect through SDF... who knew??? Luckily, no one else was there and I got to use my super powers and claim the cockpit jumpseat. I normally don't mid cockpit seats, except on RJ's. You think the passenger seat are uncomfy, try thinly padded board for a seat with a seat back at a perfect right angle. Luckily, for the hour flight, it's bearable and it gets me home. Then there's the coolness factor that I actually can sit in the cockpit and tap the pilot on the shoulder should he miss a radio call (it's only happened once).

So, that's the golden ticket that I use to fly most the time, 60% of the time it works all the time. Except when another pilot/dispatcher beats me to the gate, or is higher ont he priority list, or the friendly folks at the FAA decie it's time for them to go for a ride.

Meawhile, as i started making my self at home in my 2 square feet of space, flurries started falling out side... oh no, de-icing in ATL... this could take a month. Luckily it stopped, and a check of the wings showed no contamination. Outta here. But it was coming, and the tep had dropped from 7C to 2C in the hour I'd been in the airport.

Turns out Delta and friends canceled a crapload (that's a technical aviation industry term) of flights that afternoon, stranding at least one of my friends... luckily for her it was int eh warmth for Texas.

Back in the Artic, it's time for another work week. Giggity. I need to do some christmas shopping and get stuff lined up for after Christmas vacay. I'm looking forward tot he warm of Southeast Asia. I had to buy some new shorts today, since I seem to have put a little weight back on for the winter, something I need to rectify soon.

It's tie to split, the parking meter is about to expire and I don't need another parking ticket.
Posted by James Dees at 11:58 AM No comments:

Life in a northern town...

Apparently winter has come to Louisville with a vengeance. I suppose it's mother nature's way of saying "SO you complained about the hotter than average summer, well here you go... so arctic blasts to shut you up"! It's not even officially winter yet, but there's lingering snow on the ground and high temps in the 20's Yes I said high. But lest I complain now, since Monday is looking like highs in the teens and more snow over the weekend.

And this is when the furnace in my apartment begins to act up. In all fairness, it's pretty much a confirmation of the adage "Assumption is the mother of all f#$% ups." I assumed the landlords had been changing the air filter. They assumed I had. In reality, my air filter had become an impenetrable wall of dust and particulates. Problem rectified, and the temperature in my place has climbed back into the almost comfortable range.

In other news, the big project I was working on has fell through. I was looking to buy a small condo in the heart of Decatur that I found perusing online at work one night. At a short sale price of $57K, it was a steal. Apparently some one else thought so too. But I did learn about the buying a house process some and loans and all. So we'll chalk it up as an educational opportunity. I'm also amazed at when I started looking around I could come up with some prett decent cash in an pinch. Of course, now I want to spend it!

I light of what's looking to be a cold miserable winter, I was thinking of making my Christmas present to myself something practical and useful to some one who parks his car on the street in a frigid place... a remote starter. I was thinking that the dealership should do it so not to void the warranty on the car, but after calling them up to inquire the cost... I'm thinking I'll suffer in the cold. Seriously, to buy and install the thing, I can spend a week and a half in Vietnam. Including airfare to Cambodia!

SO my plan for winter, however impractical, is to beat the cold by zipping off to warmer third world countries whenever snow is forecast. Still cheaper than the remote starter. The only problem is this pesky job, they seem to want me to show up to get paid (contrary to last year about this time where they were wanting me to not be paid anymore at all). On the upside, I apparently get an extra week of vacay next year. Yay more time off, however this isn't going to help with the (flawed) impression some people have that I never work.

Back to the weather, the upside to cold is it actually "feels" like Christmas. This past Saturday after returning from the TanJoe Bon Voyage Soiree (graciously hosted by Charity at her mansion in the woods, which I have named,in the tradition of all fine French Chateaus, L'Endroit où Ils Ne Trouveront Jamais les Corps) I took a little walk down the main street through the Louisville Highlands (where I live) for Bardstown Road Aglow. THink of it as a Christmas-y theme street festival. ANd it was sort of a perfect Dickensian Christmas picture... shops resplendent with Holiday decor, samples of warm treats ranging form chili to hot cocoa to caramel liqueur. People meandering to and fro in the scarfs, gloves, and hats (me included). And of course, the random Santa looked right at home in the falling snow. 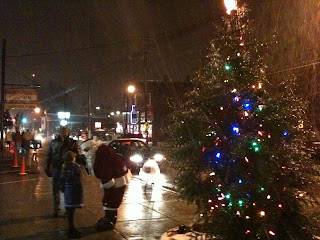 So that's the scene for the 1.5 mile walk to O'sheas, where the nights special Christmas beers were a perfect finish to the trek. The only downside was it meant another 1.5 mile walk home. Not nearly as festive this time, but still snowy. And cold. So, maybe this year I can manage to not let the stress of travel, and the total clusterf$% that is Peak season at work not ruin my Christmas cheer. And at the end, I get to spend time with a few of my favorite people in a tropical climate... and a beach trip needs to be part of that. The best Christmas present ever!

In even more other news, I put my life in some one elses hands and took on a little bit of a styling change. I let Ruth indulge herself and cut my hair into a new shape. It's a much shorter shape, and it's noticably colder. But it's a change and probably overdue. I like it and seems most others I talked to don't think I look horrible. SO win-win.

Before I pack it up and trek back home in the cold, this one is for my Southwind friends, all of whom it's been too long since I've seen. And I really plan to fix that. But for now, if you look close in the lower left, close to the window edge... you can see a special place in our hearts 29,000 ft below. Yes, THE Stuckey's... 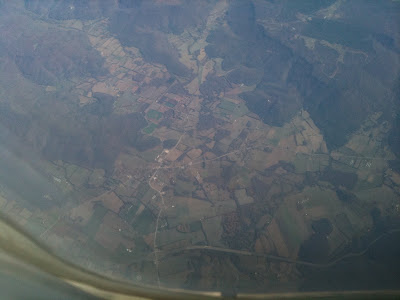 Time for another warm beverage and walk the half mile home. Till next time.
Posted by James Dees at 1:44 PM 1 comment: