Patience is a vitrue, and it turns out I'm not very virtuous

So, it's been almost a month since I've pontificated on something. I've been kind of busy, and not all that sure if I managed to get anything accomplished. The month of October has been very hectic it seems, even with the vacation thrown in, and working a couple of long weeks (you know, 5 days in a row). Turns out if I'm at work, I have a lot less time to go spend that disposable income .

The downside is my sanity and well being suffer, but that's not important. So, Rocktober has seen the return of the Lewii to resident status in the US, and I've made my trips accordingly for visitation. I'm just reminded how much I miss both of them being at arms length. Grace is once again Gracious (hahaha PUN!) enough to allow me free run of their spare (for the moment) bedroom. But I'll be evicted in due time.

So, while in Atlanta I've been scoping out new bachelor pads for me (or as I get older, Cougar traps?). I found several possible new places, but they seem to go rather swiftly. Other part of this equation is mathematical. And I've decreed my budget will allow me to invest in such a property, granted with a significant reduction in the disposable column. But that's not always bad, a little focus and less "blow" money could be a good thing.

Depending on the results of my latest bidding, I may be downsizing in Louisville to something smaller. Which, again, isn't all bad. The other tormenting decision has been along the lines of do I want to buy in a city I'm not technically "living" in. Well, to that I say I do "live" there more than I "live" here. My weekends are spent away most the time, with the occasional one stuck in town. Plus, regarding it as being "stuck" also shows my feelings. SO, what the hell, if i get tired of commuting after a few years I'll sell. Hopefully by then we'll have an economic recovery and housing prices might just rise.

And really, who wouldn't want a view like this? 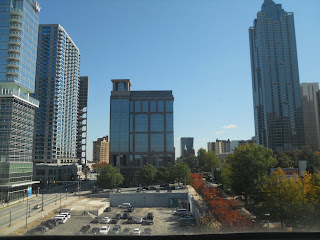 SO I'm actively bidding for a place, and thanx to HGTV and my realtor I'm kind of figuring this all out. If it works out, expect a housewarming party to be announced shortly after the new year.

Otherwise, the last week of October found me on vacation. And I know everyone expects me to flit off to the far reaches of the globe when I have a weeks vacation. This time, I kept it local. By that, I spent some time with Adri in Amherst, crashed a party in NoHo, checked out the Capitol building in DC (and thinking about applying for a job there, Senator looks like a pretty easy one you can get with no qualifications), spent a day in Annapolis with Jennie (and her great company), drove down to ATLizzle, and caught up with friends and family. It was a nice little east coast tour. 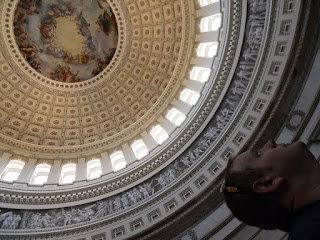 I was very lucky to get to spend time with all the lovely people up in Amherst, some of whom I don't even know at a party we weren't "technically" invited to. Also great to catch up with friends over beers in Little 5, not to mention Halloween festivities and karaoke in New-Nan. And as always, time with Jennie is awesome. She's best little sister a brass line can have.

Oh, and speaking of brass lines, there was a small reunion of us drum corps types outside Montgomery a couple weeks ago. it was great to see old friends and make a couple new ones. It amazes me, still, that even though we, as a group, can not be around each other for over a decade but fall abck into friendships like we just saw each otehr yesterday. Sure some of us have grown up, have careers, families, etc... but we're still those bewildered kids that would wake up almost every morning on some gym floor in god knows where wondering what we were thinking by signing up for this, and paying for it. But, for all the speeches and pep talks Wofford, Big Dave, Tommy, and the rest gave us about "enjoying this time", "missing it when it's over", and "the person you can't stand now will be the life long friend you know you'll always be able to count on" that we all didn't believe... well they turned out to be dead right. I feel kind of bad for the spouses that look at the adults they married revert to adolescents and wonder "what the hell did they do to these kids" to cause this behaviour. To paraphrase bouncey Pouncey, it was the worst summers of our lives, but it was the best times of our lives.

Well, like all good things, the vacation had to end, October has closed, and the beginnings of winter are being felt arund the country. The drive home was good for some time to think, and snicker at passing the Beaver Carpets and Hardwoods sign again, and make a plan. I liek fall, and hate to see it go. Even the drive to ATL and back wasn't horrendous, owing to the colorful fall foliage along the way. Not quite to new England standards, but it helped. Of course on the way back I was talking (and texting and emailing) to my realtor and bank and working out a bid for a new home. Amazing device that little iPhone.

So, now all I can do is wait for the bank that holds the property (it's a short sale) to say yes we accept or go # sand. Its a time of excitement and terror. Meanwhile, the peak shipping season is coming, hopefully I can make some extra cash and have a nice vacation in January. Look for me to be a little grouchier, owing to the cold weather and extra hours, but maybe a lot excited about having a cool place for people to come hang in the big city. We'll see where this road ends. 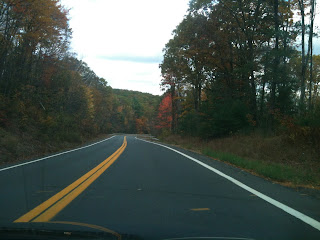 Posted by James Dees at 4:05 PM No comments: